Congratulations on that “New” Honda Clarity. It's design is 48 years old.


I'd like to thank Honda for giving me an excuse to talk about my new 1982 Citroen GSA. Yes, I'm the cynic, but in a strange reversal of roles, you may cynically call me out for referring to a 1982 car as “New”. Well, maybe that's true, but if so, then a 2018 Plug-In Hybrid that copies that 1982 Citroen (The Citroen GS was actually launched in 1970) isn't very new either. 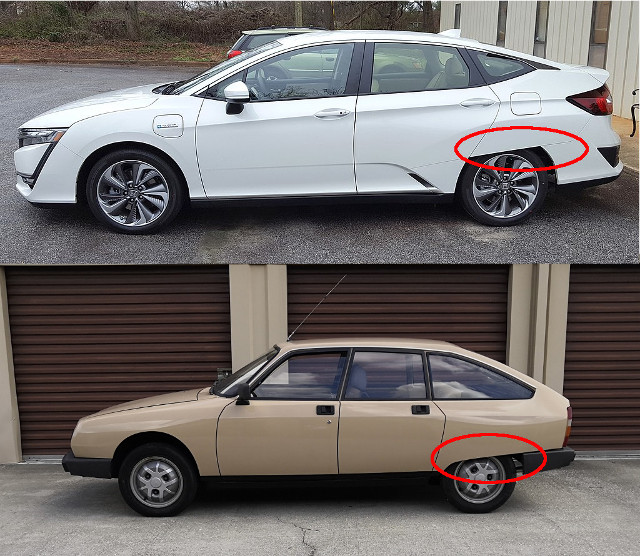 Read on, and I'll leave most, but not all, cynicism aside as I explain...

Take a close look at the body work around the rear wheel of the 2018 Honda Clarity, and then have a look at the same area of the 1982 Citroën GSA. Notice how the sheet metal cuts across the top of the rear wheels, partially enclosing them. It's even the same down to the detail of how the sheet metal continues in a straight, sloping line toward the rear, while the lower part is filled in by the plastic bumper covers.

This design is done for aerodynamics - a reduction in drag. A reduction in drag means lots of things: It can mean an increase in range for an electric car, or a real reduction in fuel consumption for a gasoline powered car. It also means a decrease in emissions for any given distance driven. This is true in any car, as there is no such thing as a zero emissions vehicle in the real world.

Even that little bit of extra sheet metal cutting across the top of the rear wheel really does reduce fuel consumption and emissions. The Citroen GS/GSA had the lowest co-efficient of drag of any mass produced vehicle of it's time (1970 to 1986), and got nearly 40 mpg.

Enclosing the rear wheel further saves even more energy, but people don't like fender skirts, even partial ones, for two reasons. First, they don't like the looks, and yeah, if they use a car like the 1952 Nash Rambler pictured below as a point for their argument, I really don't have much of a case against them.

People also think, sometimes correctly, that fender skirts make it more difficult to change a tire, if that should be necessary. Again, in some cases, this argument can be true, but watch the following video (starting at 4:34), and you'll see that it's not true in all cases:

In fact, if you look at the design of that 1987 Citroen CX, and then have a look at the 1999 - 2006 Honda Insight, you'll see that Honda has copied Citroen before. The CarCynic owned a 1999 Insight, and the fender skirts are so similar to those from the 1987 Citroen CX, that if they where both laying on the ground, you couldn't be blamed for trying to install the Honda Insight fender skirts on the Citroen CX or vise-versa (except that the Insight didn't come in black.) 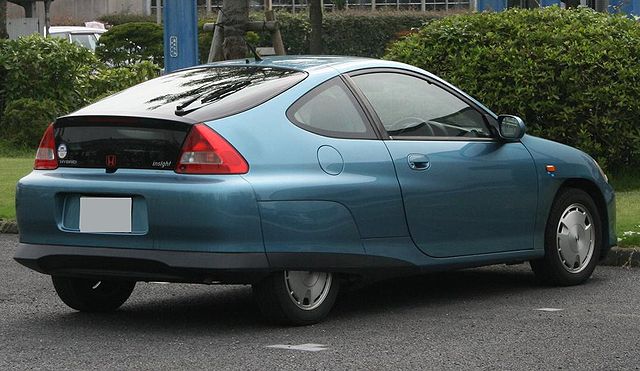 The insight was a disappointment in other ways, too. Despite getting 80 mpg on a single one-way trip of over 40 miles (thus burning less than 2 quarts of gasoline for that trip), it was actually the highest total cost of ownership (TCO) car that I have ever owned. It cost me well over $20,000. Yes, it did get good gas mileage, and Yes, looking at the digital dash was cool for the first 3 days I owned it, but other factors, such as handling, performance, seat comfort, and the radio where not up to acceptable standards for a car in that price range. I traded it in a few years later, having lost more money to travel the miles I travelled in the Insight than it cost me to travel the same number of miles in a 1987 Chevy Suburban 4x4 that I owned at the same time. And another thing... if you count the environmental impact of manufacturing the Honda Insight, including it's hundreds of “mildly toxic” NiMH cells(1), it would have been more environmentally friendly just to keep driving the already-built Chevy Suburban(2,3).

Notes:
(1) In addition to Hundreds of NiMH Cells, the Honda Insight also contained a conventional lead-acid battery that contained - you guessed it - lead, as most cars do.
(2) I owned the Honda Insight for less than 5 years. Had I kept the Insight, it would have eventually made up for the environmental impact of building it, however, in the time I owned it, it still had more environmental impact from it's manufacture than from it's actual on-road emissions. Hybrids, Plug-In Hybrids, or pure electric cars) do not have lower emissions associated with their manufacture than other cars, in fact, due to their battery packs and associated extra electronics, they may have more environmental impact of manufacture than a similar gasoline powered vehicle.
(3) I purchased the Honda Insight new, thus driving demand for the production of replacement stock. The Chevy Suburban was purchased used, and did not drive demand for new production.