[Previous entry: "The CarCynic speaks with Jerome Vassallo, Elio Motor's VP of Sales"]
[Next entry: "Yes, You can by a new Citroën in the United States (Part 2 - Update)"] 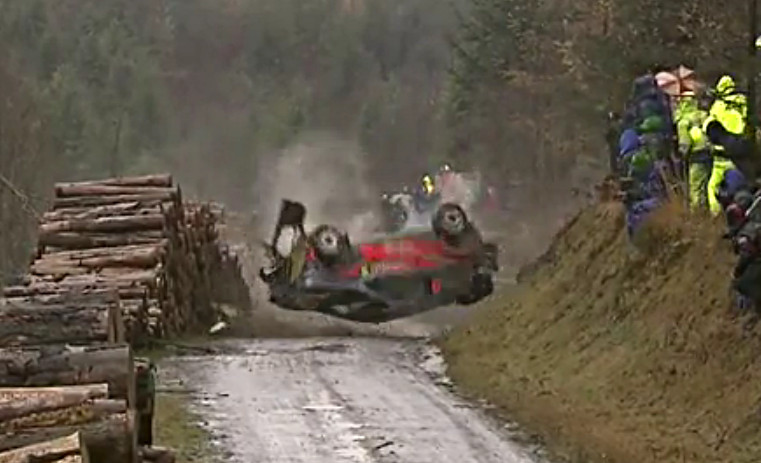 Caption: This is what happens when a certain Korean Car company tries to challenge Citroën for 2nd Place in the WRC Manufactures Championship. Photo taken from still frame of FIA/WRC video:
www.wrc.com/en/wrc/media/videos/page/112--80--.html.
Other than Ego's, there were no injuries in the event depicted.

First, the Bad News: There will be no official, factory Citroëns in the 2016 WRC (World Rally Chamipionship).
The good news is that Citroen will be back in 2017 with new cars and a fresh start.

Click on to Read the CarCynic's witty WRC commentary...

The CarCynic lauds this decision. Citroen had previously stated that moving forward, they would choose WRC -or- WTCC (World Touring Car Championship), but not both. It just did not make business sense to pursue both.

The problem is that nobody watches or follows WTCC -- OK, not nobody, but especially here in the United States, people have never heard of WTCC. A few remember the European Touring Car Championship, but that hasn't existed for over a decade. Furthermore, "Touring Car" is associated with expensive cars, and spectators that spend more on sunglasses that most fans earn in a month.

WRC fans are Citroen's customers. They'll hike many Km's, up a hill and stand in the woods all day in a freezing rain for a 3 second glimpse of their favorite car/team/driver. When race weekend is over, they go back to -- Work -- a term unfamiliar to the fans behind the diamond studded sunglasses in the special sections of the WTCC stands.

Even here in the US, there is recognition of World Rally Racing. Most people just associate it with fans getting run over back in the Group B days, but at least it is recognition. Some even know that term -- "Group B". A smaller subset know that Citroen drivers/teams won the championship many years in a row. Any kid that Googles "Rally Racing" is going to see a picture of a Citroen very quickly -- they tell me about that when they see my Citroens at car shows.

The other part that is good news in my opinion, is that after only a few years, Citroen is killing off the DS3 Rally Car. Basing thier WRC efforts on the DS3 turned out to be a poor decision on a number of fronts. First, the DS3 (the production car) didn't need the marketing. It sold so well that Citroen could not produce them fast enough. (LINK). Second, the DS3 really wasn't a good basis for Rally car. It's not marketed for it's off-road prowess, and while there is a "Citroen Racing" version, it comprises few of the DS3 sales.

Before I mention the next factor about why I'm not sad to see the DS3 Rally car go, I want to inform readers that I am not clueless: I know that WRC cars are no longer based on the production car, and I also know that Sebastian Loeb's leaving the team had a lot to do with their lack of a Manufactures Championship the last 3 years. Never-the-less, I think that the overall shape, size and configuration of the DS3 did not make a good basis for a Rally Car. I think that basing the WRC car on the DS3 handed an advantage to Volkswagen, who based it on a smaller, more nimble basis.

Taking a year off also makes sense. It's a rational business decision, and will allow them to develop the car in a logical and technically correct way for the 2017 season. It also doesn't mean we won't see the new car on the WRC circuits in 2016. I'm sure that at some point, we'll see testing. Also don't forget that there will still be independent Citroen's in WRC2 and JWRC.