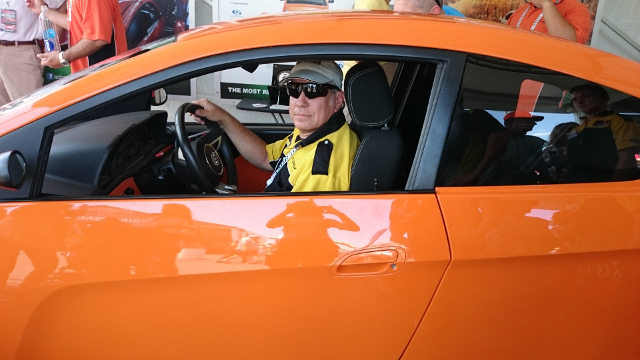 The CarCynic met up with Elio's Jerome Vassallo, Vice-President of Sales at The Barrett Jackson Collector Car Auction in West Palm Beach, FL. Hit the Read More Link below to read about our conversation, and some things about the Elio car that Elio Motors can't tell you. 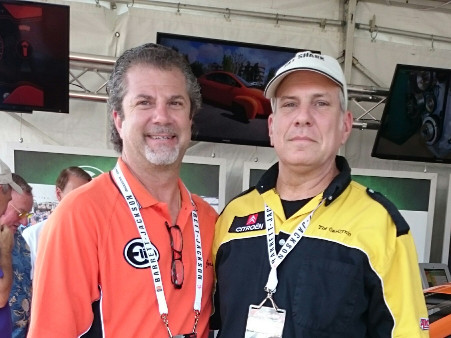 I had the honor of meeting Jerome Vassallo, Elio Motor's Vice-President of Sales, as well as his wife Pam and several members of the Elio team at The Barrett Jackson Collector Car Auction in West Palm Beach, FL. I must say that I am just as impressed with the Elio People as I am with the car. Far more important to the automotive buyer than 0 to 60 time, Lateral G's, or EPA ratings is the attitude, perspective and philosophy of the people that make the company. Every one of them that I spoke to was a true “Car Person”. They are not just marketing drones, or salespeople pushing whatever “Widget” they are told to push. They are passionate about Elio, and they have the knowledge to back it up.

That said, I'm a devout gear-head, and my questions were mostly along technical lines.

One thing I was curious about is the gearbox, or transmission. A weak, problematic or just crappy feeling transmission is the Achille's Heal of many small economy cars. Turns out their answers for this left me much relieved. The Elio is going to be available with your choice of 2 gearboxes: a 5-speed manual or an auto shifting 5-speed. No 1950's technology planetary gears, no moped-derived CVT's, and no energy-wasting torque converters. In fact, the Manual and Auto gearboxes are actually the same, the latter just shifted automatically by a smart system of actuators. On the Elio (or any car), this type of transmission provides the best combination of performance, longevity and economy. In fact, Jerome told me that in their tests, the auto gearbox actually gets better economy than the manual one. No, it can't predict the future like a good driver with his hand on the shifter, but it also never misses a shift, or slips the clutch. I don't care if you are Sebastian Loeb, you are going to occasionally make a less than perfect shift. Of course that smart automatic gearbox does raise the price a bit.

So what about that part Elio can't put in their marketing or on their website? Well -- I asked Jerome why Elio does not more openly attack Hybrid and Electric cars. Why doesn't Elio point out that Hybrid and Electric car warranties don't cover the degradation of capacity that happens over time to all current battery technologies? Why don't they point out that an Electric car may state a certain acceleration, and a certain range, but not mention that if you accelerate at that rate, you are not going to get that range (See Note 1)? Why Doesn't Elio explain that an Electric car may advertise a fast charge rate, and a large number of cycles on the battery, but if you fast charge it, the number of times you can charge it goes down? The Elio of course has a conventional gasoline engine, and thus suffers none of these “gotchas”. Well, basically, Elio is the new neighbor, and they are trying to get along with the other automotive companies. They are educating the public, but they are trying to keep it positive. Jerome mentioned the Elio “Perpetual Motion” advertisement. Basically, this cool video points out that the Elio is going to cost less to operate over time than even a theoretically perfect electric car. Jerome said that is basically as close as they plan to get to an attack ad.

The CarCynic, on the other hand will have absolutely none of this “Keeping it Positive” nonsense, and here's an example: I recently spoke to a BMW sales rep at a “Green Transportation” event at Kennedy Space Center. They were trying to push the BMW i3, but the BMW guy explained that the BMW i3 can't make the drive from Miami to the Space Coast. It does not have enough range (even in low-performance, economy mode), and there are no charging stations along the way. Even if there were a strategically located charging station, it would have taken 3.5 hours for a full charge, or at least 30 minutes (See Note 2) for that battery-damaging fast charge (assuming the correct fast charging equipment was available, not just a regular outlet.) So the trip time from Miami nearly doubles to over 7 hours. Oh, and by the way, you can buy six (6) Elio's for the price of a BMW i3. The Elio will get you to Miami and back on a single tank, and if you want to fill up and keep doing Miami -- KSC -- Miami laps, you can fill the tank of an Elio in about 3 minutes. Oh, and re-filling the fuel tank of an Elio does not damage it or decrease it's capacity over time.

So that's all for my report on the Elio for now. Jerome and I did cover a few other topics during our talk, and I'll cover more about Elio Motors in the future.

In the mean time, you can ask the CarCynic any questions about the Elio or Elio Motors you may have. Just post them as comments to the Google Plus Post about this article.

While Jerome and the crew did tolerate me, their tolerance of the CarCynic (which some would put a high price on) was the only compensation.


Note 1: I find it funny that the word “Range” does not appear on the Tesla Model S “Specifications” Page. Range is not a specification of an electric car?!

Note 2: It is very likely that the high outside air temperatures typical of a Miami-KSC drive at most times of the year would limit fast charging even more.