Home » Archives » June 2014 » How did the CarCynic's Father know about the GM Ignition Switch Issue 45 Years Ago?

[Previous entry: "Carcynic.com Aerial Photography"]
[Next entry: "Does Citroën have a Future in the WRC?"]

How did the CarCynic's Father know about the GM Ignition Switch Issue 45 Years Ago?


This is an article about Automotive Safety. To find other Safety Related articles, use this Canned Search 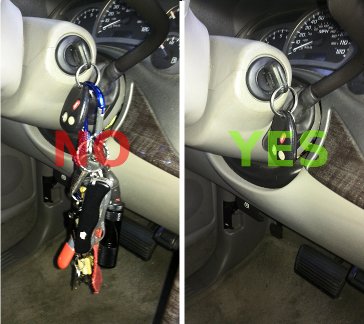 45 Years ago, Cars didn't have Air Bags. American Cars didn't even have shoulder harnesses, and many Americans didn't wear the lap belt. It would be 10 years until the first NHTSB crash tests, and 15 years until the first US Seat Belt laws. The term "Blood Alcohol Level" didn't exist outside of a few medical research committees, and a "Breathalyser" would have been science fiction.

The Carcynic wasn't tall enough to see out a car windshield, and child car seats were largely unheard of. But in my Dad's smelly old Volvo, buckling up was mandatory -- No complaints, no questions, no discussions. So when one day my Father started a safety lecture even before we fastened our seat belts, I remembered it. It was 10 years before I would even get a "Learners Permit", but something compelled him that day to warn me about adding unnecessary objects (weight) to my future keychain. Perhaps another reason why I remember it was that I was just about eye-level with the ignition switch.

Part of his impromptu lecture was about mechanical failure. He explained that the motion of the car increases the force of any weight pulling on the key. These forces are borne by the Ignition Lock mechanism. As the force and movement increase, so does the wear. Steering column locks were something new, and replacing an Ignition Switch even before then was difficult, and it was and remains a fairly expensive job.

He did, however, also mention safety. If the Ignition Switch wears, several several things can happen. A worn tumbler can allow any similar key (or eventually even a screwdriver) to be used to start the car. The Ignition Switch could also allow the key to be removed without turning it to "OFF". My old Chevy Suburban had this particular "convenience". My Father also mentioned that the engine could shut off while driving. I can't claim to specifically remember him mentioning that the steering column could lock, but that is an obvious possibility once you think about it.

Furthermore, anything attached to a keychain can cause injury in an accident. This is not news either. My Dad knew it in the 1960's, and so did the Automotive manufactures. Saab started putting the ignition switch in the center console in 1969.

Fast forward to 2014, and the issue of attaching things to your car keychain is all over the news. Now to be clear, I'm not blaming the victims. Investigation has shown that the GM ignition switches in question were not as robust as industry and government standards call for. Never the less, extra weight on the key chain has been at least implicated in all of the actual crashes. NTSHA testing has shown that it took a combination of the weight of 20 additional keys, and extreme driving to produce unintended key movement. There is a lawyer who claims to have an affidavit from a GM owner who reported having the engine shut off with nothing but the key in the ignition, but that is a single situation, and there was no accident in that case. Why the engine quit has not yet been diagnosed.

Another interesting note is that of the 13 fatalities that all parties agree was related to this issue, "Many also were women."(article link below) Sorry to wane a bit sexist perhaps, but I suspected this even before I found that report. I have no data on what was attached to particular victims' keychains, but in personal observations ever since I started riding with friends, dates, and co-workers, I have noticed that young females have much more of a tendency to hang superfluous stuff from their keychains.

This note is not about those who have passed, except to send my condolences to the families and friends. I am truly sad that it was the object of one of my passions was complicit in your loss. The same goes for anyone who was injured.

Perhaps, at sometime in the past, what my Father told me saved my life. I have "lectured" other drivers on this issue when I have seen excessive stuff on their keychains. This has sometimes resulted in "non-endearing" looks or comments. I also understand the current sensitivity of the subject, and the impression that I am taking sides, or blaming the victims. I mention it only for the reason that my father mentioned it to me all those years ago... Safety, or at the very least, the avoidance of a large repair bill. 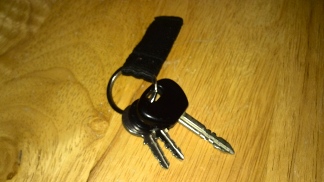 Actual Configuration of my Citroen Dyane keychain since prior to the GM Ignition Switch issue. The Citroen Dyane never went to a single Key for entry and ignition, so I carry other keys on the keychain. The 3rd key is for the factory locking gas cap. The additional keys are very small and light. The strap adds very little weight, and makes it easy for me to get it out of my pocket. It also prevents wear both in my pocket, and when hanging from the ignition switch.


Here's some common-sense advice. Take it however you wish -- The intention is your physical and financial well-being

If your car has a conventional key and ignition switch, remove unnecessary stuff from your keychain -- no matter what brand of car it is.

Also think about your personal security. If you have a separate key and fob (remote), you may want to carry them separately - i.e. one in a purse, and the other in a pocket. If you loose the Fob, you can still unlock the vehicle with the key, and start it. If you loose the key, you can use the fob to enter the car, re-lock it, and thus gain at least some safety while you look for your key, or call for help (do not remain in a closed car without ventilation unless the security situation outside warrants it). If they are connected together, and you loose both, you have nothing. This arrangement does not work for all vehicles/all situations, but think about it before you get in a bad situation.

Remove any unnecessary stuff from the entire passenger cabin -- anything can become a projectile in a crash.

Never put anything between you and the airbag -- Unless you would like to have that item surgically removed from your chest or face.

Passengers should sit properly in the car at all times. Again, sorry to appear sexist, but from my observations, female front-seat passengers especially seem to sit in "unusual" configurations - Feet out the window, knees up in your face, feet on dash, etc. If the airbag goes off you are going to get seriously and painfully injured. No, you will not have time to move. No, you will not be able to sue the manufacture.

Sources:
Source of quote: "Many also were women."
GM recall: Many victims were young drivers

Other articles were read during research for this article.