The Carcynic's Award-Winning Classic Citroen Automobiles may be available for movies and commercials. It's a great way to give authenticity to European sets or scenes. The CarCyinc's garage is minutes from Central Florida Film Studios. Static or Moving. Terms Negotiable. The CarCynic has experience on film and TV commercial sets.

Additionally, the Carcynic is available for appearances or talks. The CarCynic can appear in CarCynic Pit Crew attire, and can speak on a variety of topics, drive, crew, or facilitate. The CarCynic is also a professional DJ. Contact the CarCynic using the email anti-spam address below:

While you are here, please checkout the rest of the Carcynic.com website for Automotive Humor, Reviews, and Safety Information.

Read on for information about the cars. 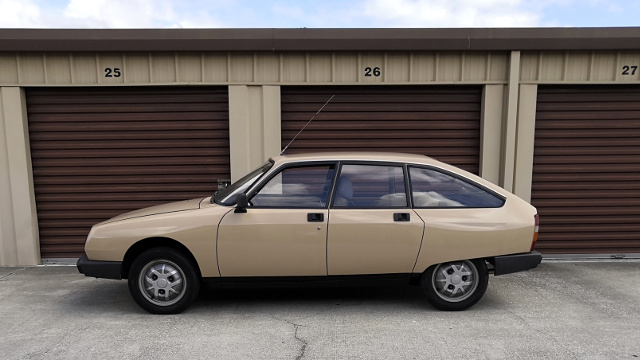 The Citroen GSA is a 5 door hatchback automobile produced from 1979 to 1986. It is, in essence, a Series II of the Citroen GS, which was first launched in 1970. It was voted European Car of the Year for 1971, and was noted as being technologically advanced, with class-leading comfort, safety and aerodynamics. The GS and GSA (sometimes referred to collectively as "GS/A") were designed by Robert Opron, who also designed the Citroen CX (1975 European Car of the Year), and the Citroen Sports Maserati (SM). Opron brought his aviation design experience to Citroen, resulting in the GS/A having the lowest aerodynamic coefficient of drag of any mass produced car of it's time.

The aerodynamic body is moved through the air by an unique flat-4 air-cooled overhead-cam engine, resulting in fuel economy figures that remain noteworthy in an era of hybrid and diesel economy cars (close to 40 mpg). Having a displacement of only 1300cc, the engine and 5 speed manual gearbox can still propel the car to over 100 mph. The boxer layout also lowers the center of gravity, reducing body roll in the turns. The GS and GSA represented the smallest, and least expensive Citroens to feature the unique Citroen Hydropneumatic suspension system. As with the DS, CX, SM and later Citroens, the GSA also used the central hydraulic system to power aircraft-style hydraulic brakes, with disc brakes standard on all 4 wheels. The brakes were inboard mounted (as on a F1 car) on the front, making for a more advanced braking system than is found on many of today's cars in this class. It does not, however, feature the DIRAVI active power steering system of it's more expensive cousins, instead having a standard, unassisted rack and pinion. Like all Citroen passenger cars starting with the 1930's Traction Avant, the GS/GSA is front wheel drive.

The unique design features are also found on the interior. This includes the signature Citroen single spoke steering wheel, and the "Spaceship" dashboard. Most notable are the "PRN pods", which are a progenitor of the ergonomic control pods found on the Citroen CX and CX series II.
The term "Club" refers to a mid-range trim and accessories option, in between the base model, and the loaded "Pallas". 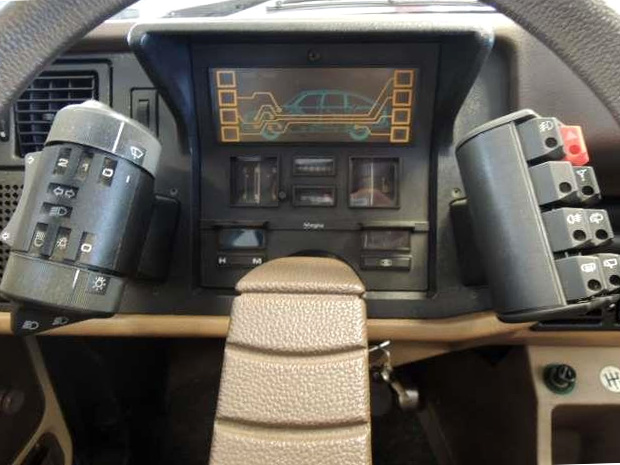 NOTE: Dash photo is actually from a GSA X3.

Over two and a half million Citroen GS's and GSA's were produced, not counting licensed versions made in other countries. In addition, the Olcit Club (AKA Citroen Axel) shared the same engine, but not the body or hydropneumatic suspension. These other cars added up to more than a million additional similar or derivative cars, and production continued in some countries into the early 1990's. The GS and GSA were never offered for sale in the United States, and could not even be special ordered here. The dozen or so GS's and GSA's currently in the US were imported individually by Citroen enthusiasts. This means that while parts are readily available in most of the world, potential owners on this side of the rock should plan on importing most parts.

This particular example was built at the Citroen factory in Rennes, France (pronounced like "Ren" in Ren and Stimpy), and originally sold new in The Netherlands. At some point, it received a 3rd party rust treatment and re-spray in it's original beige color. Citroen Andre in the Netherlands located this car for the CarCynic, arranged for some pre-shipment mechanical work, and managed the export process. All Ways International Shipping handled importing the car on the US side. The car arrived in the port of Jacksonville in March of 2018, where the CarCynic took possession of it, and arranged the remaining necessary inspections, registration, and some additional mechanical work as well as safety upgrades, including the in-house manufacture of a custom 3rd Brake light (CHiMSL). 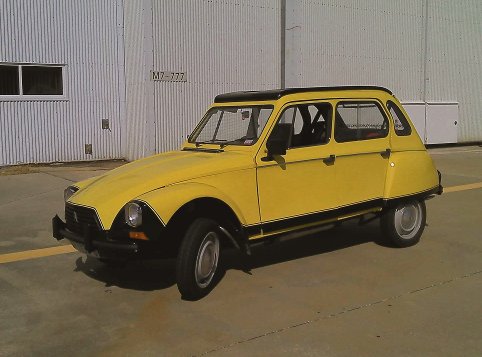 The Citroën Dyane is a derivative of the famous French Citroën 2CV or Deux Chevaux (meaning “Two Horse”). It shares the same opposed twin air-cooled engine and 4 speed transmission. The Dyane engine produced slightly more horsepower, allowing a higher top speed (over 70 MPH). The Dyane also has a slightly longer body, yielding more interior room, and, unlike the 2CV, is a true hatchback. The Dyane also shares the 2CV's unique front-to-rear linked suspension and most other 2CV mechanical components.

Since over 10 million 2CV's and derivatives were made, finding mechanical parts is not difficult. Many parts for Citroën 2CV's are still produced. The exceptions being certain body and interior parts that are unique to the Dyane.

In 1981, a special, limited edition Citroen Dyane was produced in Spain. This special addition was known as the Dyane “Capra” (a reference to the astrological Capricorn). The Capra included a custom black and yellow paint scheme, special interior, and other subtle trim features. Eurocar Imports was able to reproduce this custom paint scheme on this car. There are fewer than a dozen Citroën Dyane's in the country, and this is the only Dyane Capra (original or replica) known in the USA.

The Citroen CX is named after the mathematical representation of the Co-efficient of Drag (Cd or Cx). The CX has one of the lowest drag coefficients in the automotive industry. In addition to the unique Robert Opron styling, this CX also embodies almost every technology Citroën is known for. This includes a central hydraulic system that operates the brakes, suspension and steering. It is a common misconception that these cars have "air suspension". Nothing in the suspension contains or operates using air or air pumps. There are also no suspension springs or shock absorbers. High pressure nitrogen provides a better ride than springs ever could, and ride height control and dampening is provided by the hydraulic system. The DIRAVI speed sensitive "fly by hydraulics" steering makes driving this car unlike any other. You can see me demonstrate the CX hydraulic system in this YouTube video.

The Turbocharged, 4 cylinder, 2.5L, 190 HP engine provides about twice the fuel economy of a large American car of the time, while simultaneously giving the performance European drivers expect. Top speed is near 150 MPH. All Turbocharged CX's had 5-speed manual transmissions.

Citroen utilized a Bosch Fuel injection system for the CX, and thus most external engine parts are the same as (for example) a BMW 325i of the same period. Many other parts are standard as well. As long as the special hydraulic fluid (known as LHM) is kept clean, hydraulic failures are almost unheard of in the later Citroëns. Similarly, the engine, sometimes referred to as a "Tractor Engine", due to it's low RPM and high torque, is very reliable. There are many of these cars still on the road in Europe with over 200 thousand miles on them.

"Prestige" refers to the lengthened or "limousine" body, which gives exceptional rear passenger leg room. Other "Super Car" features include a "Single-Double" windshield wiper, the same factory mirrors as Jaguar and Lotus supercars, and Jaeger (of Jaeger-LeCoultre) Instruments. It was also one of the first production vehicles to feature keyless entry.

The example owed by the CarCynic was imported new by CX Automotive in New Jersey. Original sale price in the US was over $80,000 in 1987 (Approximately $169,000 in today's dollar). It has had several owners in the US. While it was modified for the US market, many parts have been converted back to the original Citroën parts. There are only about 5 CX Turbo Prestige's in the United States, and still fewer with the factory Black - on Black Leather scheme. Major maintenance/restoration of this car was completed in 2014 at Dave Burnham Citroën in New York.

Not on Google Plus? If you liked this article, share this URL on the social media site(s) you use!