[Previous entry: "Looking for the Aerial Footage of Citroen Rendezvous?"]
[Next entry: "The (not a) Car I Learned about Today: The Air Hogs X4 “Stunt” Toy Quadcopter"]

Warning: Science Ahead: Why Don't We See Air-cooled Cars Anymore?

[Science Ahead is a regular column here at the CarCynic. To find more, use the search box on the left or hit here for a canned search for other Science Ahead articles on CarCynic.com.] 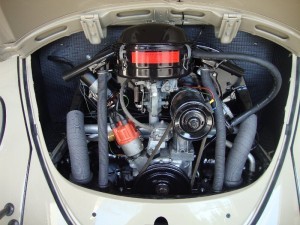 Classic Beetle Air-cooled Engine
Photo listed as "Free to use, Even Commercially"

The Original (Type 1) Volkswagen Beetle is one of the most iconic cars ever built. Even just taken by itself, and not counting derivative vehicles such as the similarly iconic VW Bus, it was produced in larger numbers than any other vehicle platform. Regular readers may point the "Citroën Bias" finger at me again, but the same can be said of the Citroen 2CV. It's iconic, and it was produced in the millions.

What else do these cars have in common? They were both air-cooled. I could go on listing famous cars that were air-cooled: The Porsche 911 up until 1987... The Famous (Infamous) Chevrolet Corvair -- also produced in the millions.

Yet today, there are no air-cooled cars. From being the most popular car of all time, and being produced in the 10s of millions to exactly 0 in only a few years... Why?

If the air-cooled car was such a bad idea, then why did manufactures make them, and why did they sell so well? If there were some advantages back then, what happened to make them so undesirable now? I wasn't advised of any changes to the laws of physics.

The fact is that air-cooled cars do have distinct advantages. One of the original motivations was reliability. Up until the 1970's water pump failures were pretty common. Better materials, and better coolant additives have largely eliminated this problem now, so in that respect one of the benefits of Air-cooled cars has gone away. But another motivation was fuel savings, and it can hardly be argued that fuel savings is not a consideration today.

Are air-cooled cars more fuel efficient than an equivalent water-pumping counter part? Yes, They really are, and it's for several reasons.

A conventional water-cooled engine is essentially built as one engine inside another -- with water cooling passages in between. Since the outside (called the "cooling jacket" in the old days) must be larger than the engine, it adds a significant amount of weight. Weight added to the engine ads to the weight of the car overall, and thus decreases the car's fuel efficiency. Especially in a front-wheel drive car, it does not help handling either.

Add to this the weight of radiators, pumps, pulleys, and, of course, the water itself.

As important as reducing weight is for fuel efficiency, it doesn't make the engine produce any more usable power for a given amount of fuel. (See Warning: Science Ahead #1:Engine Performance) But Air-cooled engines really do burn fuel more efficiently. Its pretty obvious, actually. A hotter fire produces more energy than a cooler fire, and air-cooled engines run much hotter than their water-jacketed equivalents.

To illustrate this further, there is even a more extreme example. Back about the time of the 1970's gas crisis (See Link Below), there was much talk of Ceramic Engines(See Link Below). The Ceramic could survive temperatures in the thousands of degrees, essentially allowing uncooled engines. By allowing cylinder head temperatures of many thousands of degrees, much more energy was obtained from each drop of fuel. Now, there were downsides to a glowing hot mass of ceramic, of course -- Boiling the paint on the hood, burning the insulation off any nearby wiring, and consideration of what happens in a collision, caused the idea of ceramic engines to go cold very quickly, but the original motivation was fuel efficiency.

If you were a child pyromaniac like I was, you also learned that a hotter bonfire leaves behind less and finer ash than a colder fire. The same applies to engines. The higher the cylinder head temperature, the fewer unburned hydrocarbons come out the tailpipe.

Taken together, the 2 points above also pass the common sense test. If it is true that the air-cooled engine makes more power from a certain amount of fuel than the cooler-running water pumper, then the extra energy must come from someplace. It comes from burning more of the fuel that flows through the engine.

But I still haven't answered the question... Why don't we see them anymore? If they save fuel, and reduce emissions of unburned hydrocarbons as I claim, the we should see more of them. I propose that a car with a gasoline air-cooled engine designed today could get fuel efficiencies on a par with diesels and hybrids. But there is no such car, and I'll (Finally !) tell you why...

See that sentence 2 paragraphs up? Read it carefully -- "The higher the cylinder head temperature, the fewer unburned hydrocarbons come out the tailpipe." It's true, but intentionally miss-leading. (Perhaps I should be running for political office instead of writing automotive articles.) "Fewer unburned hydrocarbons" is not the same as "Lower emissions", and it's certainly not the same as "fewer harmful emissions".

And therein lies the answer. As combustion temperature increases, emissions of Oxides of Nitrogen increase exponentially. In other words, less stuff comes out of the tail pipe of an air-cooled car, but what does come out is nastier -- much nastier. Nitrates of Oxygen (NOx), refers to lots of chemicals (the 'x' being substituted with a number). NO - Nitric Oxide, NO2, Nitrogen Dioxide, NO3, Nitrate... OK, I think you're getting the idea. These nitrates, when combined with moisture in the air, make Acid Rain (Water + NOx = Nitric acid). Even worse, Nitrates of Oxygen simultaneously make and destroy Ozone. They destroy Ozone high in the atmosphere where it protects us from Ultraviolet light and global warming, and create it down here, where it causes respiratory disease. It also makes auto bloggers who played with VW powered dune buggies in their youth, ramble on and on when they write.

Now it's true that all cars produce these nasty Nitrates, but we have several ways to deal with them. First, all cars today purposely waste fuel to decrease emissions of NOx. Modern Fuel Injection (Engine Management) systems run the engine slightly richer (more fuel for the amount of air) that what would produce the best fuel economy. Our cars purposely dump extra fuel out the exhaust in order to cool the cylinder head, and thus reduce NOx emission. Now before you get all upset at the evil car makers, I want to clarify three things. First the engine is running slightly rich. I'm not implying that they are dumping mass quantities of raw fuel out the tailpipe. Secondly, there are other reasons for running on the rich side of ideal (called stoichiometric). It also makes your spark plugs, valves, and in fact the whole engine last more than a few thousand miles, and that's a good thing. -- Oh, and the third thing I wanted to clarify -- The car makers are evil, but for lots of other reasons.

NOx is also reduced by every car guy's best friend (Sarcasm Alert), the Catalytic Converter. These much mistrusted and misunderstood boxes of precious metals and exotic chemicals break down NOx into plain Oxygen and Plain Nitrogen... at least for a while.

So if running a bit rich, and having a catalytic converter helps with our water pumping cars, why not just do the same thing on a air-cooled car? First, running rich would decrease cylinder head temp, and NOx emissions, but it would also eliminate the benefits of a higher combustion temperature. By the time we got emissions on a par with water-cooled cars, we'd actually be wasting more fuel.

A “Super” Catalytic Converter might help, and in fact the do have lean-burn catalytic converters capable of the proper chemistry, but on an air-cooled car, it would likely be half the size of the car, be just as hot and dangerous as those Ceramic Engines of the 70's, and probably have to be replaced every time you filled the tank. Exaggeration aside, it's just not practical.

I also have to admit that air-cooled cars can have some other disadvantages too, for example hot smells that are worrying to owners and passengers. Air-conditioning and other modern power accessories combined with long periods of motionless idling would present a serious challenge for the automotive thermal engineer.

Sadly, but true the best solution really is to just stick a water pump and radiator someplace. It works. It's easy. It's what manufactures do.

Next time you see a classic VW rattle down the street, or the iconic French Ente' (Duck) sputter by, give 'em a wave, but keep your other hand free to hold your nose.