[Previous entry: "Citroën Muisic Page Updated with the Song from Citroën's Paris Auto Show Flash Mob"]
[Next entry: "In Case You Didn't Notice, The World Did End Last Week - For the Citroen C6"]


To find more articles in this series, use the Search Box on the left, or Click Here.

But don't worry: for all the OK, -- OK for both of you that own or are considering owning a Citroen CX, and live in the USA, here's a guide to help you find replacement parts, and to solve common problems.

Please Note: This guide is not intended to undermine the business such as those mentioned above. Those businesses exist to help you keep your Citroen running and looking good. It is hoped that this guide will keep more CX's out of the crusher, and conserve parts for concours and show cars that need 100% authentic parts.

Believe it or not, by using this guide you can find many parts for your CX at your "regular", local Auto Parts Store.

Fuel Injection Sensors, Relays and Switches in general
Fuel Injected Citroen CX's use a Bosch L-Jetronic fuel injection system. With a few exceptions, parts from many other L-Jetronic cars are exactly the same Bosch part number. Try asking for the same part from (for example) a BMW 325i at your local Auto Parts Store. The development of the Citroen CX was very advanced in some areas, but lagged behind in fuel injection technology. It can help to look at vehicles a few years older. For example to get a part for a 1987 CX Series 2, ask for the part for a 1985 BMW 325i.

Boost Gauge sensor / Ignition MAP sensor (CX Turbo II)
The sensor that drives the Boost Gage also measures engine load for the electronic ignition system. It is a small rectangular sensor located near the Coolant sphere on the right side. It is a GM part. In GM products, it is the MAP sensor for the fuel injection system. In the CX, it is only used for the Ignition System and Boost gauge. Ask for the MAP sensor for (almost) any GM car from the '80's or 90's that had a turbo or super charger. Example: 1993 Buick Ultra. It is also called a 3 bar sensor. The key to knowing you have the right part is looking closely at the 3 pin connector. They are keyed with tiny tabs that (try to) prevent you from plugging the vehicle harness connector into the wrong sensor. Make sure the keys are in the same place on the new part. Non-turbo series II Citroen's use a similar GM part.

Most "generic" in-line external (outside tank) pumps will work in a jam.
The generic pumps usually come with an outside adapter rubber to make it fit the larger clamp, and inlet and outlet adapters for different size hoses.

Turbo Models must have a high pressure (4 bar or 58 PSI) pump.
They do not have to be blue, but the correct part seems to commonly be blue in color.
Another note about the Fuel Pumps (basically trivia, but perhaps useful).

More Fuel Pump Info (Mostly Trivia)
There is something known in performance car/racing circles as a "BOSCH -044" pump. This is a highly sought after part for engines in the 600-700 HP range. It is used by Japanese and European tuner shops, Touring (WTCC) cars, almost all World Rally Championship (WRC) cars, etc.

Fuel Pump Relay
All Petrol (Gasoline) Series II Citroen CX's use the same "Tachometric" (or Tachymetric or Tachimetric) Fuel Pump Relay (also called a Fuel Cut-Off Relay). In addition to just being a simple 12V relay that engages the Fuel Pump, this device contains circuitry to stop the fuel pump any time the engine speed is significantly less than idle. This is done to prevent supplying fuel to a fire in a serious accident. Since the original Bosch relays had a blue cover, they are referred to as "Big Blue", or the "Blue Monster". More information (than you really need) can be found here. The unit in the CX is similar to the one shown with its cover removed. (Contains a 555 Timer IC).

As with other parts, the "BMW 325i Trick" seems to work. Try ordering the Fuel Cut-Off Relay for a 1987 BMW 325i from your local parts store. As if this writing, it is about $75US + Shipping. A local BMW dealer should still have them in stock, but at about twice that cost. There are different part numbers, and I was not able to find a cross reference, but if it has 7 terminals (2 of which are small), I think they are all basically the same (Keep reading). They can also be found on eBay for as low as about $45US+shipping.
On the CX, "Big Blue" is located behind the Right Headlamp, and may be inside a nylon bag. The original Big Blue has a mounting tab, so different part numbers may simply reflect whether or not they have the tab. The location also serves as a safety feature, since any accident serious enough to rupture fuel lines is probably going to result in the destruction of a relay located that far forward. If you obtain one without a Tab, be mindful of the intended safety aspect when you mount the replacement.
Obtaining and carrying a spare Fuel Cut-Off Relay is recommended. They can (will) fail with little or no warning. The usual symptom is simply (and suddenly) not starting when it ran fine the last trip, but hesitation, quitting, or hard starting may also be symptoms or (brief) warnings. If you suspect the Relay is failed, also check the wiring and connector (socket), as the harness to it is not supported.

Here's the original French "DAV" part, and a replacement lift style switch I ordered from China. 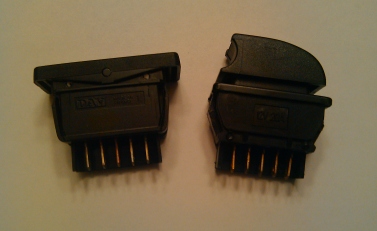 Here what the modern lift style switches look like on my CX Series II: 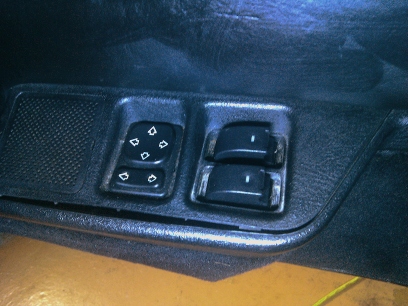 Make sure you get ones that are rated for 20 Amps DC (20A). Avoid ones that say they may need a relay for higher-currents. Here's a pretty close replacement from Deal Extreme


Mass Airflow Sensor (Series II)
Again, this is a standard Bosch part, but almost every car and every engine option had a custom circuit board with carefully set resistance curves. I have been successful buying the Mass Airflow Sensor for a BMW, and swapping out the circuit board with my old one. This works in the case of a Mass Airflow Sensor that is physically damaged or binding (bad bearings). This operation is extremely delicate, but it can be done. Re-seal the plastic cover with Marine caulk (3M 5200) when done.
Bosch 0280202101 is original part number. Bosch 0280202061 is listed for GTI Turbo II (without catalytic converter).
DO NOT use 0280202061 if your car has a catalytic converter!
Use Bosch 0280202099 (for BMW 325i) and swap spring and circuit board.
Carefully mark the spring setting before removing parts from the old one!

Please verify parts before installing This guide is just that -- a guide. You as the mechanic and/or driver are responsible for insuring that you use the correct parts, and for any deviations or substitute parts you use.